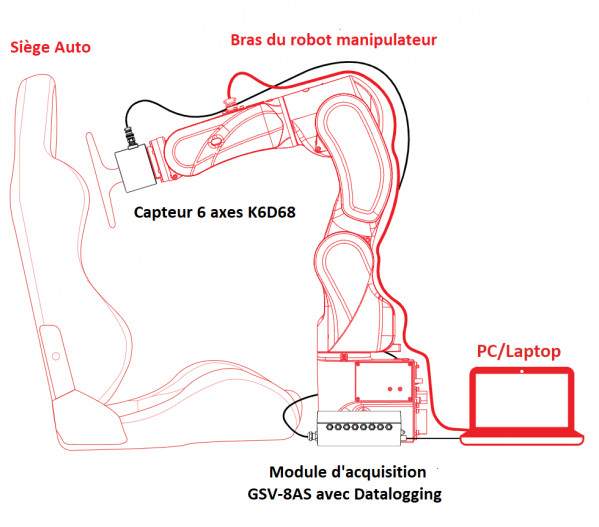 These products are intended for use by seat manufacturers and industry research centres in the development and ergonomics of the driver's seat. The manufacture of foam and seat components requires the use of fatigue and durability testing of the seat components.

The customer uses robots for durability validation of their seats under cyclic load/unload conditions. During these fatigue tests, frequent breakage of the single-axis force transducers mounted on the robot manipulators was observed, causing an interruption in endurance for the replacement of the force transducer. An internal study showed that this breakage was due to overload resulting from bending moments that had never been measured or taken into account.

Replacement of the single-axis sensor with a 6-component force sensor (Fx, Fy, Fz, Mx, My, Mz) in the robot arm. Selection of a 6-axis sensor with wider measuring ranges for the acquisition of previously unknown forces and moments, in order to avoid premature sensor breakage. A GSV-8AS data acquisition module with data logger option was used for conditioning the 6-axis sensor, acquiring and displaying the measurement signals, and recording them locally. The pressure mapping systems allow to follow the evolution of the seat components for contact pressure distribution. It can be installed on a robot for sample checks.

The 6-axis measurement chain allowed the identification of the moments, and confirmed the origin of the premature breakage of the single-axis force transducers used until now. The application of the 6X6 interchannel matrix on the raw forces allows the measurement of the real forces on each axis, and thus a better repeatability of the measurements. The pressure mapping ensures the monitoring of the evolution of foam and seat components. 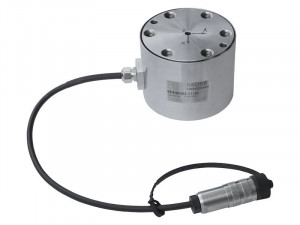 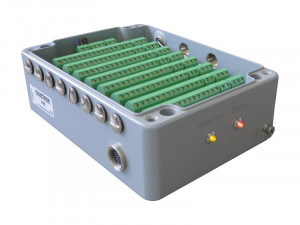